Some of the links on this blog (contextual and banner) are affiliate links, meaning if you click on a product/service from this site and make a purchase, I may get a commission from that purchase. Thanks for keeping A Novel Quest running!
May 9, 2014
Crazy Weird, Crazy Tough 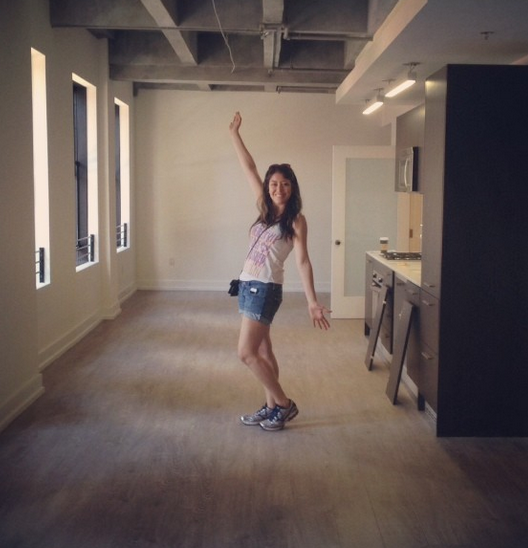 It has been crazy weird, and crazy tough.

Moving my stuff out of my apartment last Monday night, I was hit with a panic attack that was as slow moving as a mudslide and just as destructive. It lasted the entire night, and slowly started to subside the following afternoon.

I don’t think I’ve ever had a panic attack before, and it blindsided me because I had nothing to panic about. Sure, moving was a stressful time, but up until that point I had been so excited about it, I was literally crying tears of happiness hours before it happened. So when it did, it both shocked and scared me.

I had another one last night when I got home from work.

I hate trying to analyze this stuff, but I will say that what I think happened was that I was feeling so good on a surface level, but something wasn’t right internally. Something in my gut had a fit as soon as I started my new routine in my new bathroom and my new shower and my new apartment and my new commute in this new building.

I woke up this morning telling myself over and over that this was my new home and my new reality. Not because I didn’t believe it, but because it was the only thing that seemed to calm my rapidly beating heart and my crazy thoughts that were moving at the speed of light. It was like my body was freaking out because I hadn’t discussed with it all of these new changes.

Today I felt much better after some peppermint tea. It was like magic. It’s easy to slip into the alcohol and self-medicated trap when you are feeling unwell mentally and emotionally, and I didn’t want to go there. As much as I just wanted to knock out because being awake and dealing with it was too overwhelming, I knew that taking a couple of shots of whiskey would only bandage the problem and do nothing to cure it. And teas and organic/raw juices have always made me feel better, even when I am feeling good. And they definitely did the trick.

I just need to be patient with the moving process, and patient with myself. When things start spiraling out of control, I tend to blame myself even more for not being able to deal with it. I’ve told myself over and over the past couple days to be gentle with myself. The worst thing I think is feeling angry or ashamed for having a completely normal and expected reaction to such a huge change. I need to start each new day with love, for myself especially, because I feel like I’ve been giving myself a beating. And more than anything I just want to enjoy this new time in my life with Adam, who I’ve been looking forward to living with forever.

I do want to give you a brief rundown of our moving adventures too, because they were pretty funny.

— They were filming a commercial on his street on the day of the big move, making it difficult to get all of his furniture out of his apartment and into the U-haul we rented. We had to schlep it across a busy street each trip.

— Right when we started moving, my bank sent me a text message saying someone used my debit card for $500 worth of gas at a Pilot Station in Oklahoma, and was this charge mine?

— There was some crazy guy who wouldn’t leave us alone as we schlepped our stuff out of the truck and into our new building. The U-haul truck didn’t have a lock on it, so each time we went up to dump stuff in our new apartment, he would stand right by the truck, talking to himself, and telling us to make sure we locked the truck so he wouldn’t steal anything. Luckily there was a nice Mexican lady standing nearby who gladly watched the truck for us as we made each trip.

— The loft still needed a few touch ups when we moved in, and our locks didn’t work!

— Sunday morning the elevator in Adam’s old building broke — we had to carry his smaller TV down 11 flights of stairs. Phew!

On the plus side, we did get a free bottle of bubbly after signing our lease, and the place is beautiful. We are officially all moved in, so now comes the fun part of unpacking, organizing, and decorating.

Also on the plus side, KINGS ARE LEADING THIS PLAYOFF SERIES 2-1 RIGHT NOW! WOOT WOOT!

Lastly, I have not forgotten about this week’s post for the What Does This Remind You Of series, but sadly I just didn’t have time for it. Postponed till next week! I’m hoping I can get back on track with all of my projects next week, after the dust settles in our apartment and in my spastic soul.